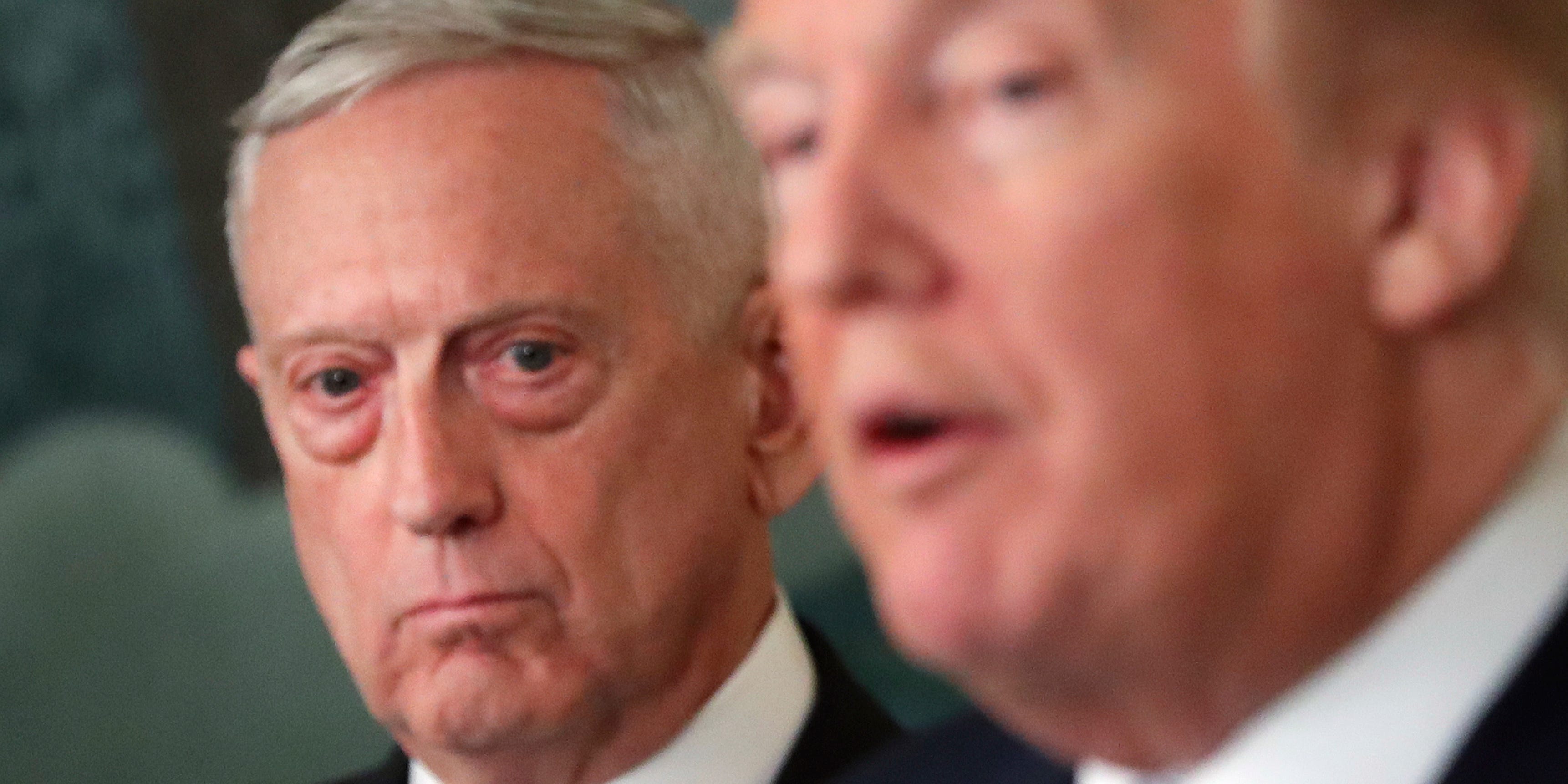 Defense Secretary Jim Mattis listens to President Donald Trump in the Diplomatic Room of the White House in Washington, March 23, 2018.

President Donald Trump continued to assert that former Defense Secretary Jim Mattis was fired rather than voluntarily resigning.
Trump claimed he asked Mattis for a letter of resignation.
The president’s recollection of the incident contradicts the account written in Bob Woodward’s recent White House tell-all, “Rage.”
In the book, Woodward wrote that Mattis made two copies of his resignation letter — one copy to take with him to a contentious meeting with Trump, and the other copy in his office to release to news organizations.
Visit Business Insider’s homepage for more stories.

President Donald Trump continued to assert that his former defense secretary was fired rather than voluntarily resigning, a claim that was refuted by a recent White House tell-all written by an award-winning Washington Post journalist.

Speaking to an audience at an ABC News townhall on Tuesday, Trump criticized Jim Mattis, a retired four-star Marine Corps general, as one of the many “disgruntled former employees” who left his administration under adverse circumstances.

Mattis announced his resignation in December 2018, citing disagreements with the president’s decision to withdraw US troops from Syria. The withdrawal, which Mattis strongly opposed, would abandon US allies in the region and conflict with what Mattis believed to be the lodestar in America’s strength.

“Because you have the right to have a Secretary of Defense whose views are better aligned with yours on these and other subjects, I believe it is right for me to step down from my position,” Mattis wrote in his resignation letter to Trump.

But during the townhall on Tuesday, Trump claimed: “he didn’t resign.” 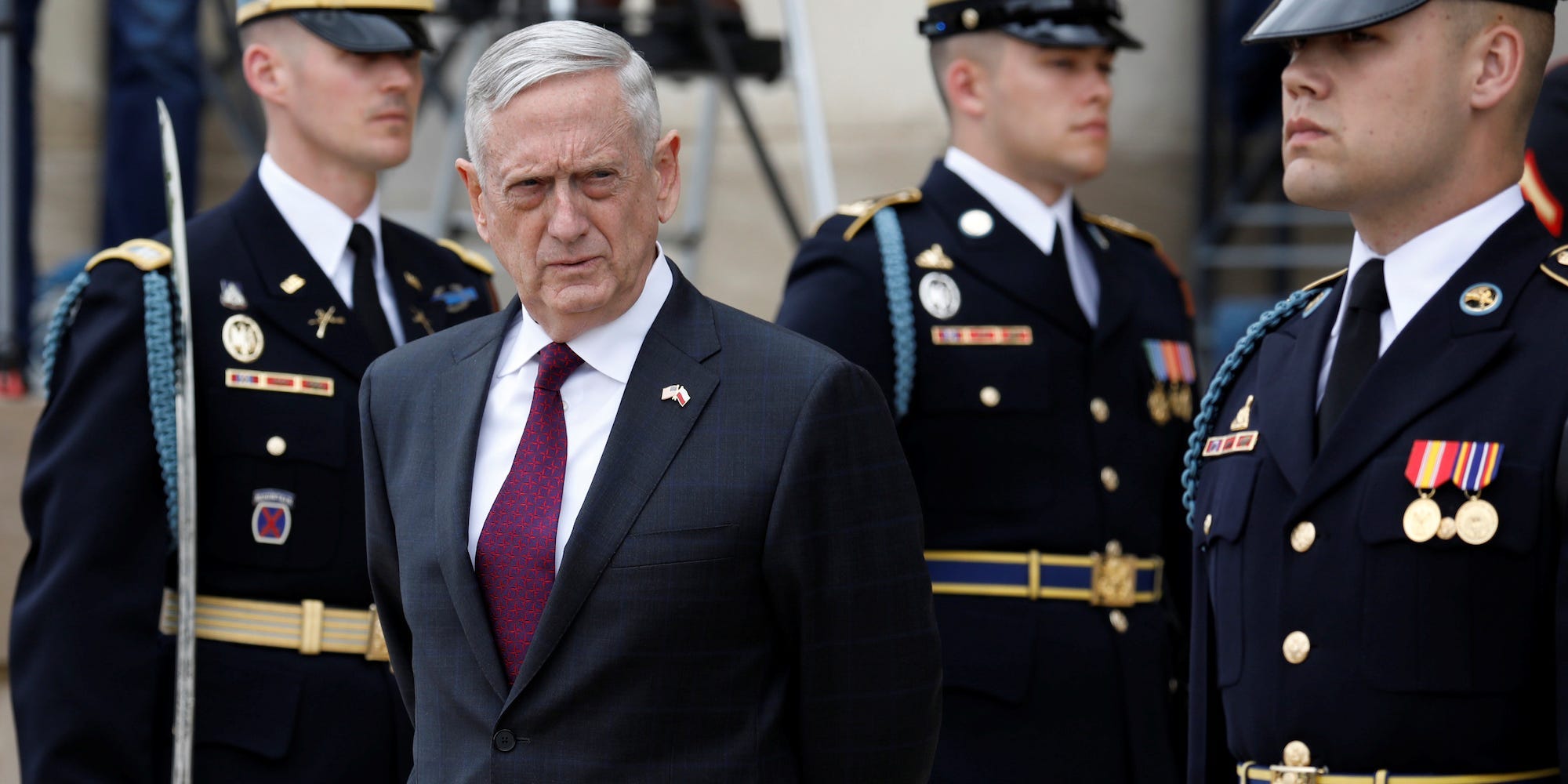 The president’s recollection of the incident contradicts the account written in Bob Woodward’s recent White House tell-all, “Rage.” Woodward, an award-winning journalist known for his work uncovering the Watergate scandal in 1972, has written numerous books about American presidents and their top advisers based on extensive interviews with insiders.

In his latest book, which was sourced from over a dozen sources, Woodward wrote that Mattis had drafted two copies of a resignation letter immediately before his meeting with the president. Mattis wanted to persuade Trump to roll back his abrupt decision to pull US forces out of Syria in late December — a conversation that he half-expected would be unsuccessful.

Mattis took one copy of his resignation letter and left the remaining copy on top of his desk drawer, Woodward wrote.

Mattis eventually failed to persuade the president that the US presence in the region, in addition to its allies, was essential in combatting ISIS.

“Mr. President, it’s probably best you read this,” Mattis said, before handing Trump his letter, according to “Rage.”

“Mr. President, if you and I don’t agree that we’re parting over the allies — the way we look at allies — then the press is going to come up, rightly, with a hundred different reasons why I’m leaving,” Mattis replied.

Trump agreed with Mattis’s assessment and asked if the letter was going to be publicized.

After leaving the White House, Mattis called his chief of staff and instructed him to release the letter on his desk to the media, Woodward wrote.

Mattis mostly kept silent following his resignation, a move that broke with other former senior White House officials who left the Trump administration in an unceremonious fashion. In June, however, he released a statement to The Atlantic suggesting Trump was a threat to the US Constitution.

“We must reject and hold accountable those in office who would make a mockery of our Constitution,” Mattis added.

The doctor behind ‘The Vagina Bible’ takes 5 precautions before waxing her pubic hair...

The Ultimate Guide to Social Media For E-commerce

This celebrity talent producer books A-list celebrities for the parties of the ultra-rich, and...

Bored at home this weekend? You can play the popular card...

I’m stuck working from my New Jersey home with my entire...

Meet the entrepreneur who has made $1 million by selling clothes...