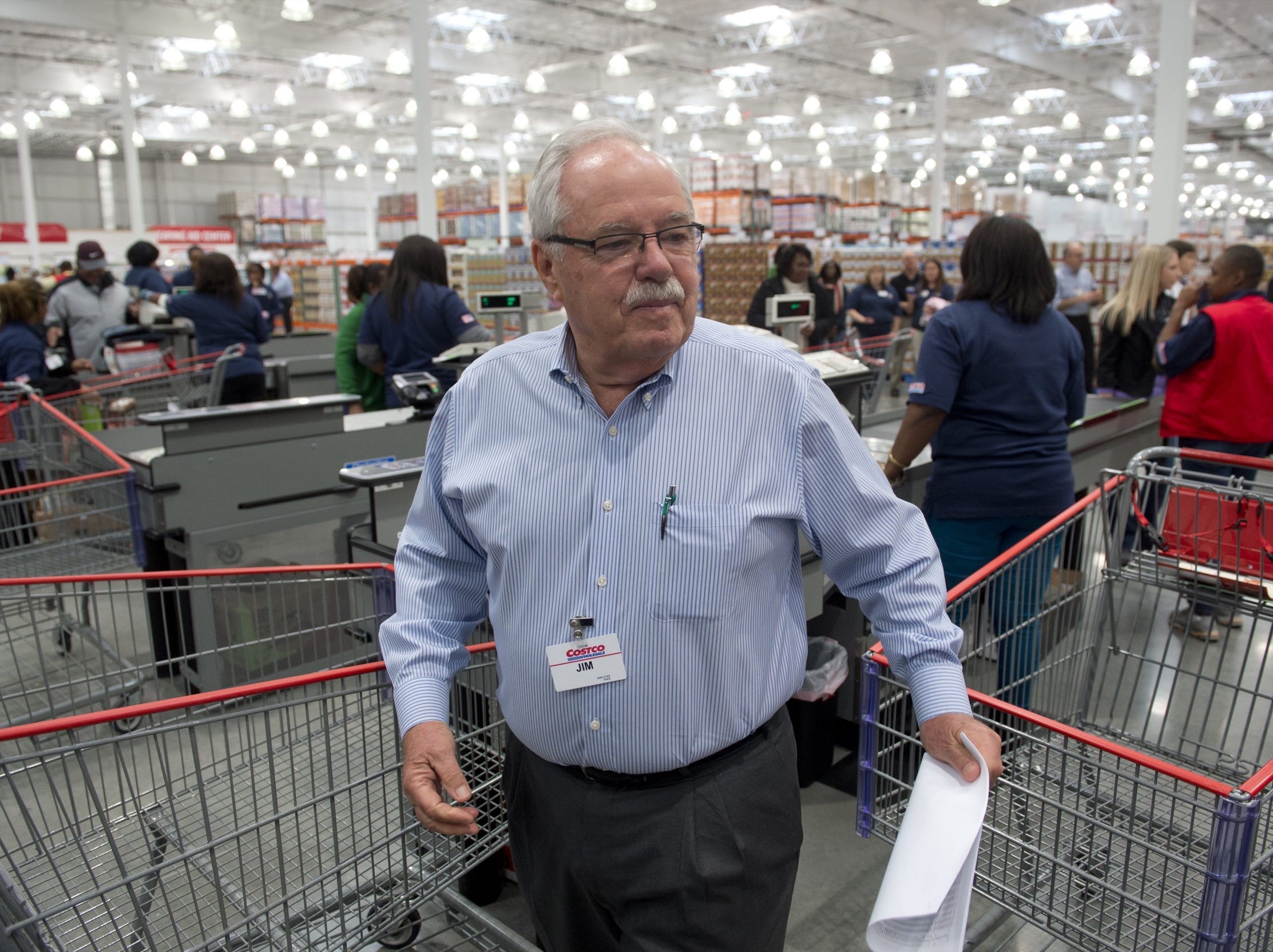 Costco cofounder Jim Sinegal walks through a Costco store in 2012.

Jim Sinegal cofounded Costco alongside Seattle attorney Jeff Brotman in 1983.
Despite building one of the largest retail chains in America, Sinegal consistently earned less than other CEOs throughout his career at Costco and believes it’s “wrong” for companies to have huge wage gaps between executives and other employees.
Sinegal is a staunch Democrat, speaking on President Barack Obama’s behalf at the 2012 Democratic National Convention, endorsing Hillary Clinton’s 2016 presidential bid, and co-hosting a high-dollar fundraiser for Joe Biden.
Sinegal owns a waterfront mansion outside Seattle and a vineyard in Napa Valley.
Sinegal retired in 2018 but remains one of Costco’s largest shareholders. His stake alone was worth $263.2 million in 2018.
Visit Business Insider’s homepage for more stories.

After discovering a passion for retail in college, Jim Sinegal cofounded Costco and built it into one of the largest retailers on the globe, while largely staying out of the limelight himself.

Before he retired from Costco’s top post in 2012, Sinegal defined nearly every aspect that makes the beloved warehouse retailer what it is today, from its low prices to its barebones decor. During his time at the company, he took a relatively low salary for an executive of his influence.

A representative for Sinegal at Costco did not immediately respond to Business Insider’s request for comment on the former CEO’s tenure at the company, net worth, political activities, or philanthropy. 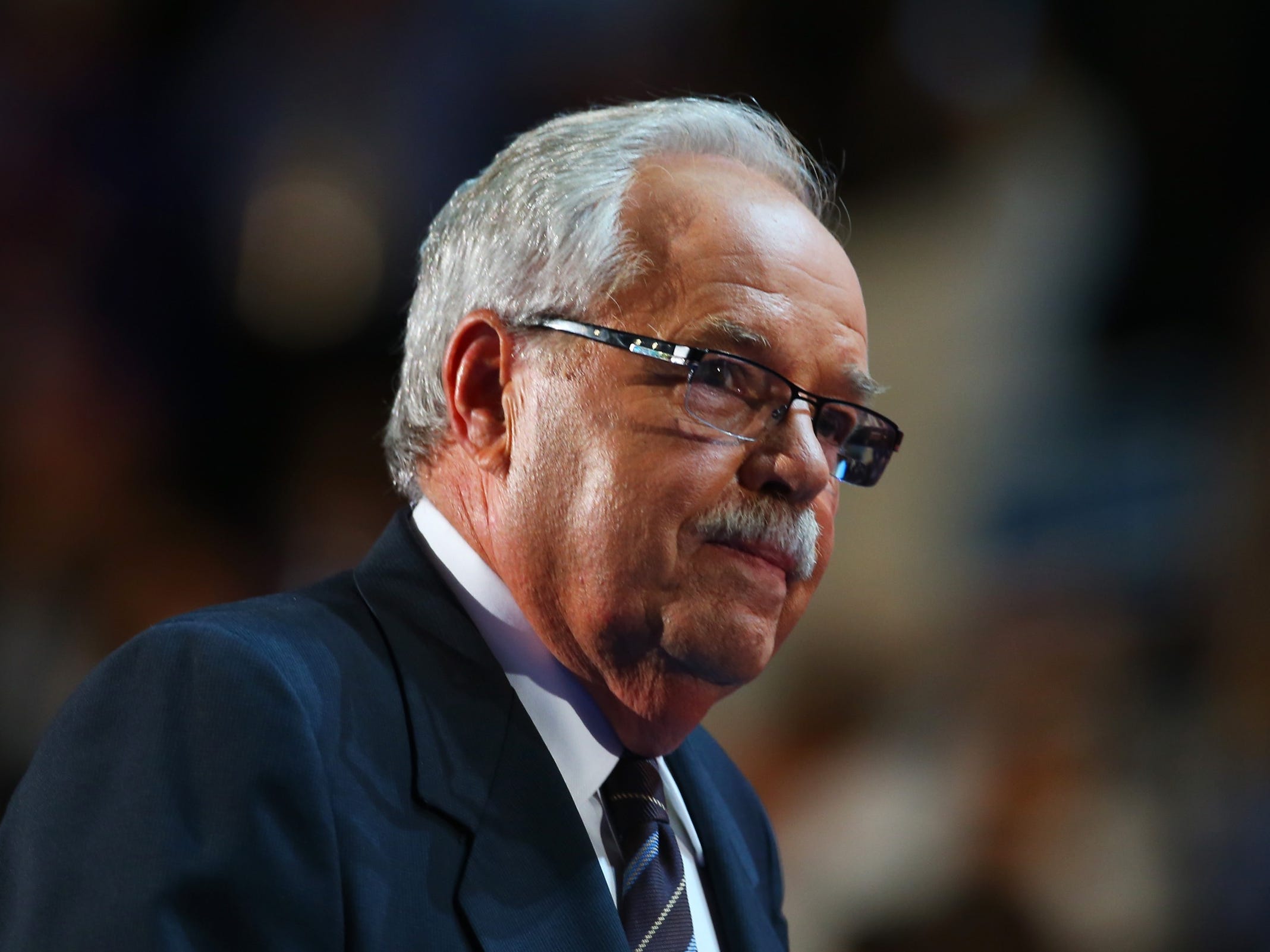 Sinegal was born into a working class family in Pittsburgh. His father was a coal miner and a steelworker, The New York Times reported.

When Sinegal was 18, he took on what he thought would be a one-day job unloading mattresses at Fed-Mart, one of America’s first warehouse retailers, according to The Times.

Sinegal went on to earn a bachelor’s degree from San Diego State University in 1959, while still working at Fed-Mart as a bagger. He eventually rose to become the company’s executive vice president for merchandising, before leaving Fed-Mart alongside its founder Sol Price (who was ousted after selling the company to a German retailer) to launch another warehouse store called Price Club in 1976 that only sold memberships to small businesses, per The Times.

According to Costco’s website, Sinegal served as Price Club’s executive vice-president of merchandising, distribution, and marketing and “was instrumental in fine-tuning the merchandise and marketing strategies.”

Sinegal opened the first Costco warehouse location in Seattle in 1983. 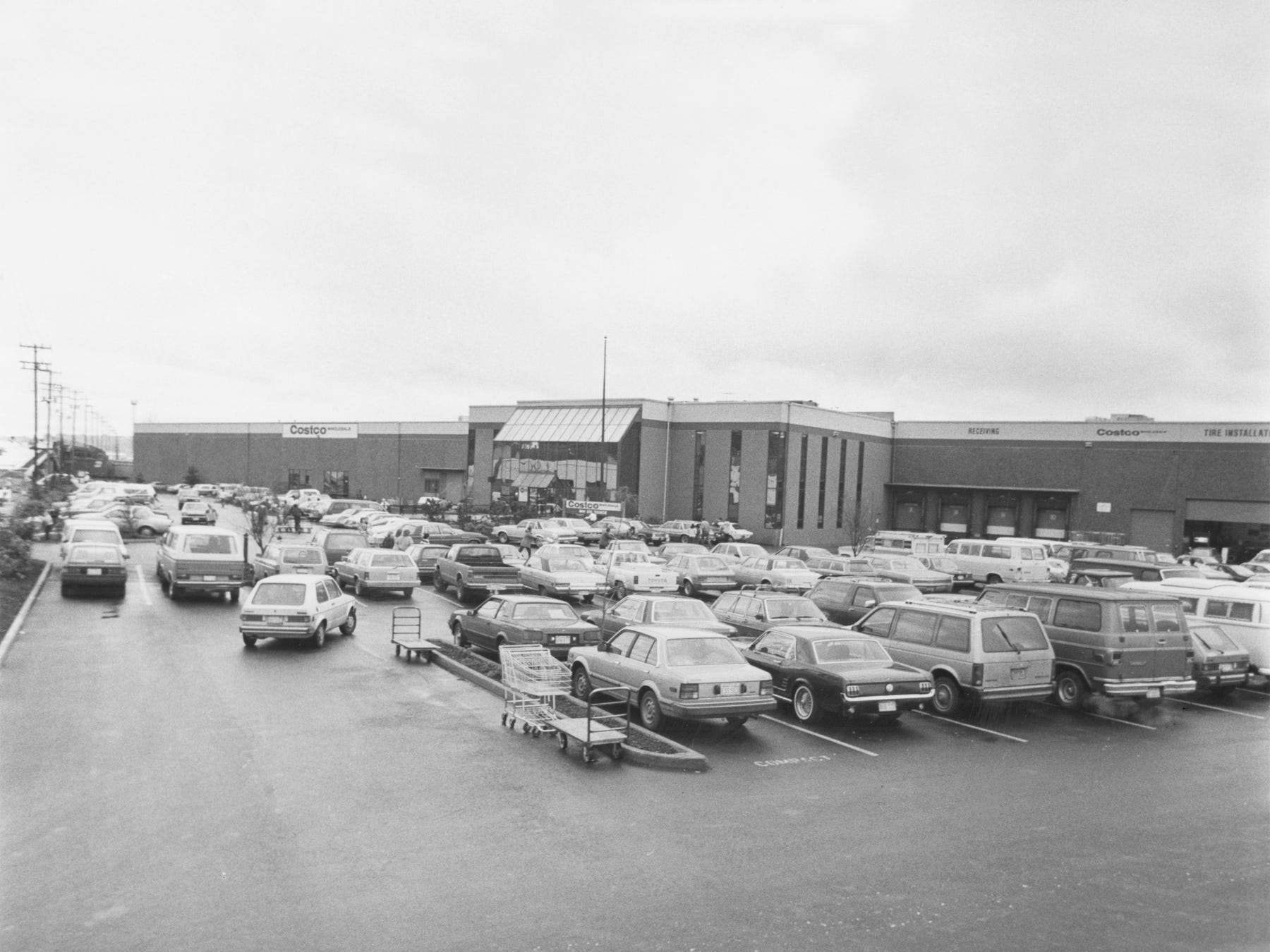 Costco’s other cofounder, Jeff Brotman, was an attorney by trade but was inspired to enter the wholesale retail space after seeing a similar store during a trip to France, Business Insider previously reported. Despite not knowing one another, Brotman cold-called Sinegal and proposed that they go into business together.

Sinegal was 46 years old at the time, per San Diego State University.

According to Sinegal, the “crowds weren’t overwhelming” when Costco first opened, but “business built up” gradually. Within a year, the company opened secondary locations in other parts of Washington state.

During his 35-year career at Costco, Sinegal was known for being frugal and going out of his way to help his employees. 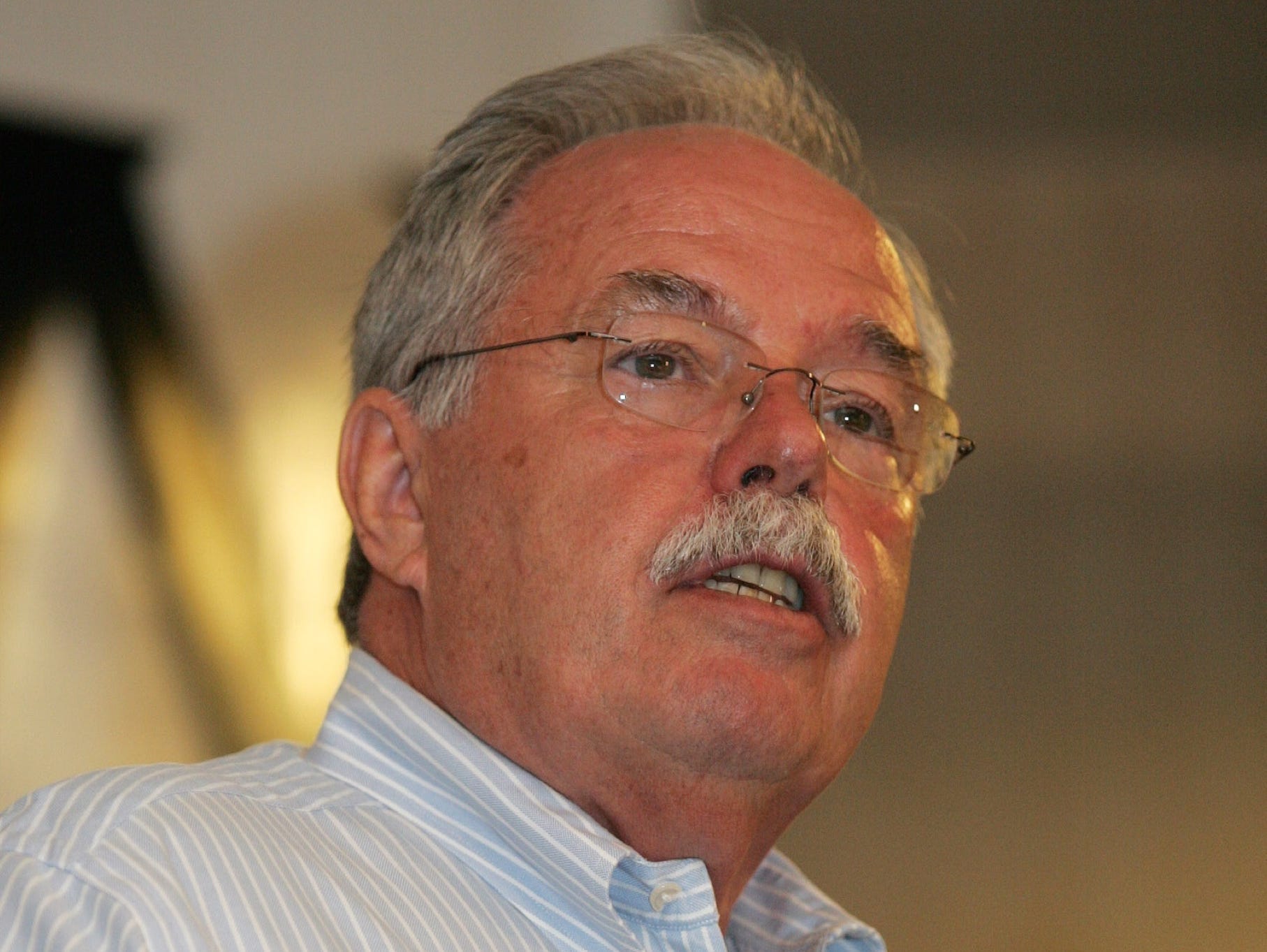 Washington Post’s Jena McGregor wrote ahead of Sinegal’s retirement in 2011 that it was “hard to imagine anyone with less pretense, more discipline or more integrity leading a major corporation today.”

An often retold story about Sinegal depicts the former CEO discovering that Costco paid 88% of employee’s health care expenses, just short of the 90% the company had previously committed to. Sinegal not only reimbursed employees for the extra 2%, but added stock directly into their 401ks so it wouldn’t be taxed, according to The Washington Post.

“This is not altruistic,” Sinegal told The New York Times in 2005 about Costco’s wages and benefits plans, which the paper called generous. “This is good business.”

Sinegal wasn’t just passionate about saving the company money. He prevented Costco from marking up the prices of its inventory more than 14% or 15% over its cost to the store, even if shoppers were accustomed to paying more elsewhere, The New York Times reported.

Despite Costco’s immense success, Sinegal earned only a third of what his fellow CEOs did while leading the company. 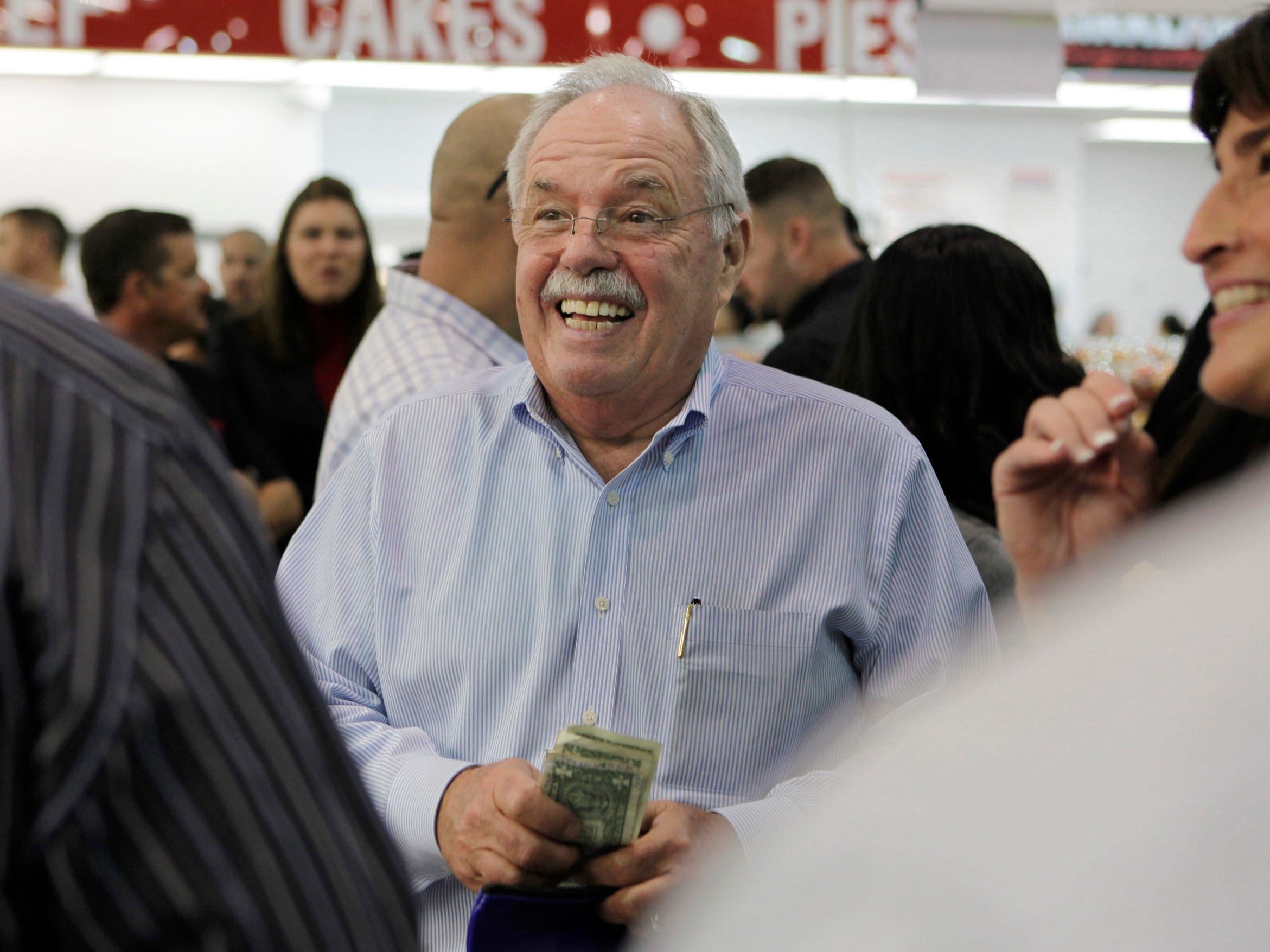 Costco CEO Jim Sinegal smiles at a reopening of a Costco store in Redwood City, California in October 2009.

Sinegal took a $350,000 salary during his tenure at Costco — far below the industry standard $1 million for Fortune 100 CEOs at the time, according to The Washington Post.

In 2010, Sinegal earned a total of $3.5 million once his stock options were factored in, per The Post. The median Fortune 100 CEO brought home $9.3 million, however.

Even with a smaller than average compensation package, Sinegal “no doubt has become wealthy through Costco,” The Post reported. Sinegal had a net worth of more than $120 million in 2005 largely due to his stake in the warehouse retailer, according to The New York Times. By 2018, that stake was worth $263.2 million, The Seattle Times reported.

“I’ve been very well rewarded,” Sinegal told The Times about his salary. “I just think that if you’re going to try to run an organization that’s very cost-conscious, then you can’t have those disparities. Having an individual who is making 100 or 200 or 300 times more than the average person working on the floor is wrong.”

Sinegal also wears clothes from Costco’s Kirkland brand and is “obsessed” with Kirkland products, he told students during a speech at San Diego State University in 2019.

Costco’s office space itself also reflected Sinegal’s modesty. The Post described the CEO’s office as a “tiny alcove without a door; the furnishings are literally as fancy as folding chairs,” and said that Sinegal even answered his own phone instead of employing a secretary to do it. 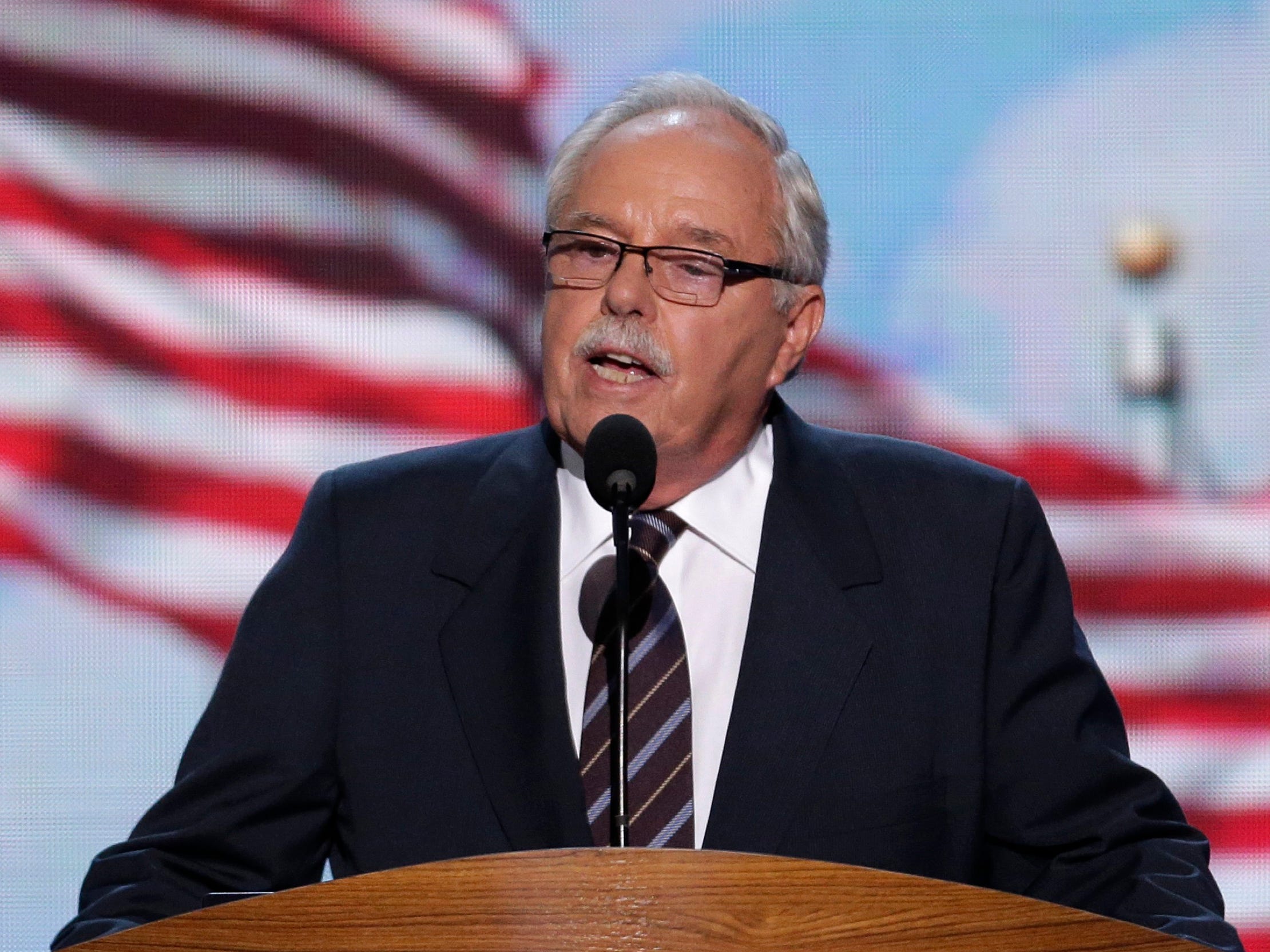 Sinegal stepped down as Costco’s chief executive on New Year’s Day in 2012, according to The Washington Post. However, he did stay on as an advisor and member of Costco’s board of directors until 2018.

For the most part, Jelinek has upheld Sinegal’s leadership strategy, prioritizing employees and keeping costs low for customers. “We just stayed to our principles — it’s what we do, take care of customers and employees and the people who are selling us merchandise,” Jelinek told The Seattle Times.

Sinegal did seemingly splurge on his living space, however — he lives in a ritzy lake-front community outside Seattle. 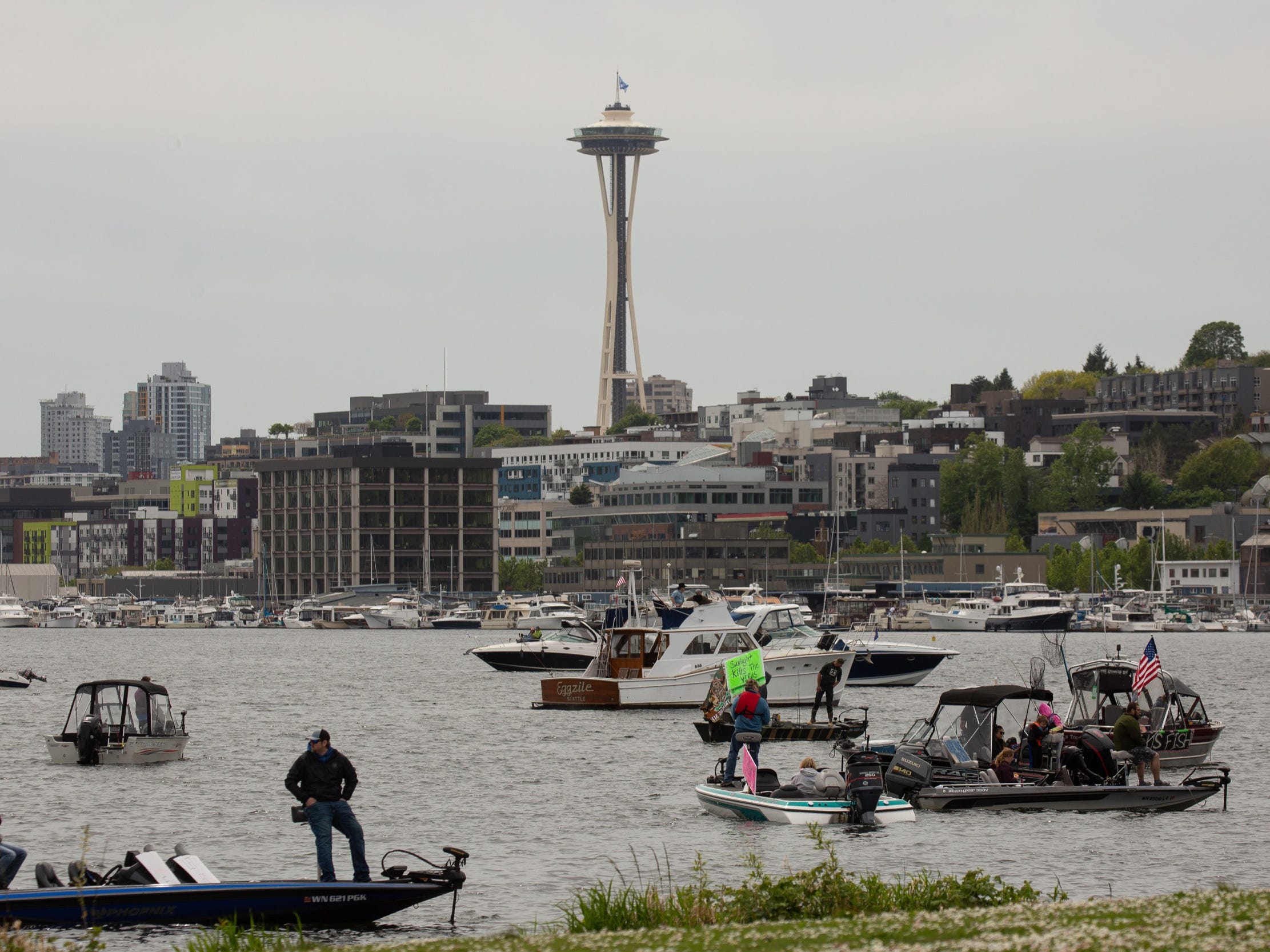 Lake Washington pictured during a protest in April 2020. Sinegal's property not pictured.

Sinegal lives in a waterfront mansion in Hunts Point on Lake Washington, according to Realtor.com. Sinegal’s neighbors include former Microsoft CEO Steve Ballmer, who owns $9.8 million and $12 million homes nearby, and department store heir and former Seattle Seahawks owner John Nordstrom, per Realtor.com.

Sinegal lives with his wife Janet, a philanthropist. The couple met as students at San Diego State University and have three adult children.

Sinegal also co-owns a vineyard in Napa Valley with his son David, he told The Seattle Times in 2018.

The Sinegals hosted two fundraisers for former President Obama’s reelection campaign at their “sprawling” Lake Washington estate in 2012, where guests paid as much as $35,800 to meet with Obama, The Seattle Times reported.

Sinegal is an outspoken Democrat. 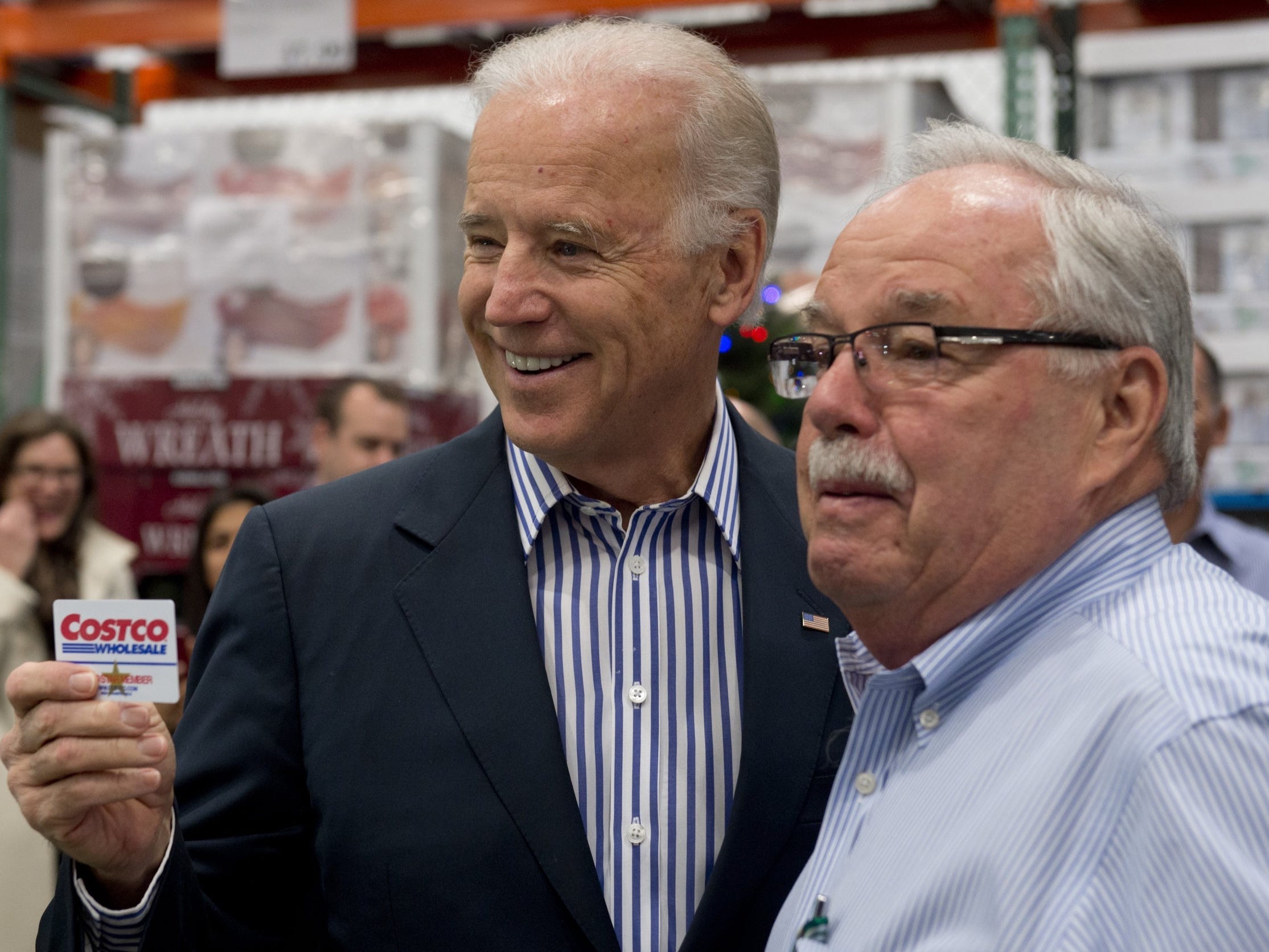 Former Vice President Joe Biden poses with his Costco card and Jim Sinegal (right) at a Costco store in Washington, DC, in 2012.

Sinegal made a speech in support of President Obama at the 2012 Democratic National Convention.

“Some of my friends in corporate America say that they need a government that gets off the backs of businesses, and that’s why they’re supporting the opposition with donations of hundreds of millions of dollars,” Sinegal said, “but I think they’ve got it all wrong. Business needs a president who has covered the backs of businesses, a president who understands what the private sector needs to succeed, a president who takes the long view and makes the tough decisions. And that’s why I’m here tonight supporting President Obama.”

Sinegal’s involvement in Obama’s reelection effort didn’t end there. The Costco cofounder wrote an email blast for the Obama campaign and donated $200,000 to groups supporting the former president, per The Washington Post.

Outside of the campaign, The Post described Costco’s relationship with the White House as a “romance.” Obama frequently mentioned shopping at Costco, and called Sinegal “a great friend of mine and somebody who I greatly admire” during a 2014 visit to a Costco store, per The Post.

He also donates a lot of money to higher education. 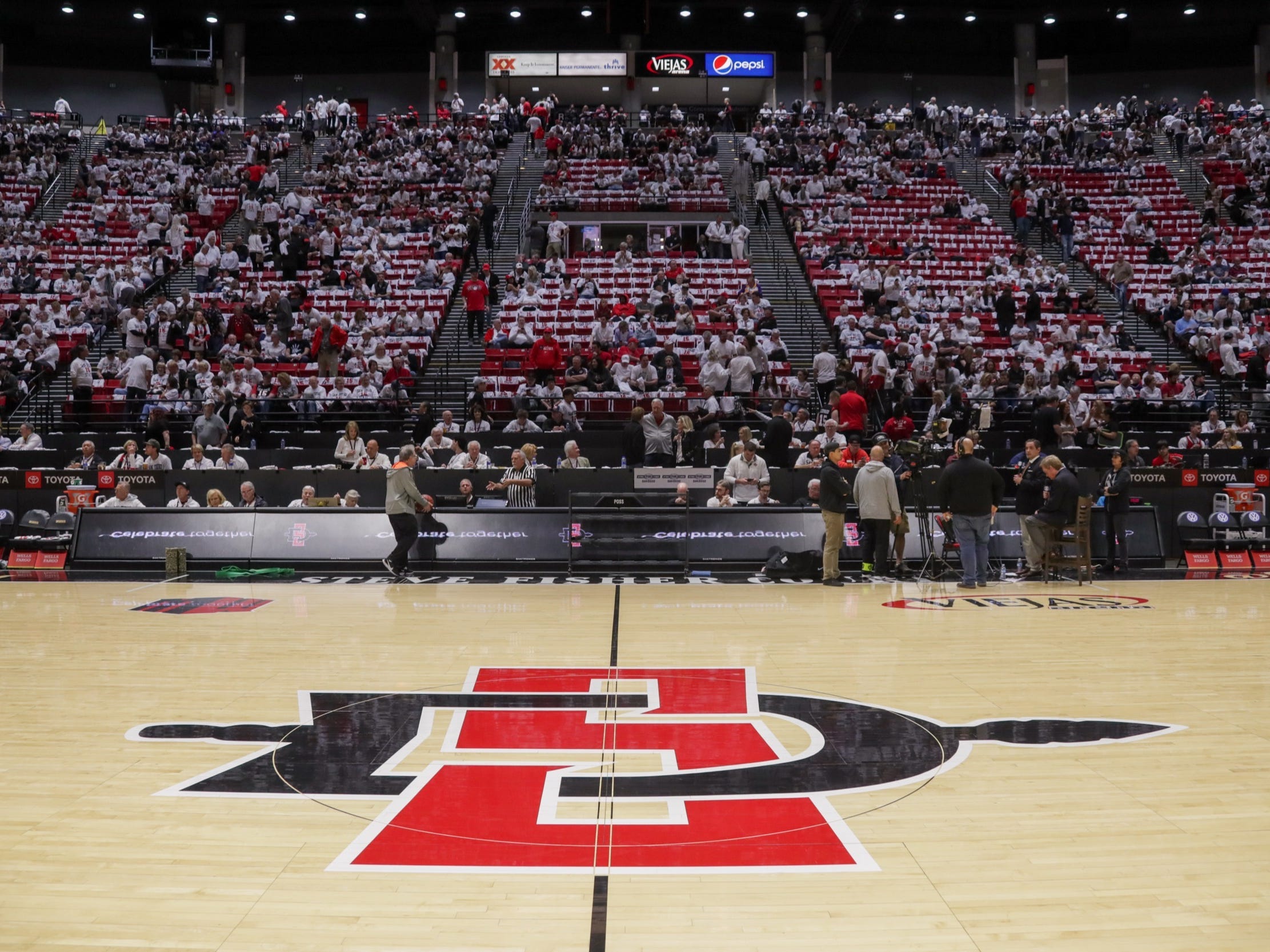 The Sinegals operate their own family foundation, which issues five full tuition scholarships to students at Heritage University annually. The couple has also made numerous gifts to fund scholarships at their alma mater, San Diego State University.

Sinegal was one of several Washington-based entrepreneurs to contribute to the University of Washington’s coronavirus testing research amid the pandemic, per The Seattle Times. Although the exact size of Sinegal’s gift was not disclosed, he was listed among the “major donors” who gave between $200,000 and $2 million. The project’s full donor list reads like a who’s-who of the Seattle chapter of the three comma club — former Microsoft CEO Steve Ballmer, Amazon CEO Jeff Bezos, Schmidt, and Microsoft CEO Satya Nadella all chipped in, according to The Seattle Times.

“There are a lot of smart, hardworking people out there, and not all of them make it,” he told students during a speech at San Diego State University in 2019. “You earn a reputation for ethical practice by being consistent and avoiding arrogance. It’s easy to get corrupted if you’re not paying attention on a daily basis.”

Disney filmed parts of ‘Mulan’ in China’s Xinjiang, where millions of Muslims are being spied on and locked up

If Your Small Business Hasn’t Gone Digital Yet, You’re Going to Be Left Behind

I’m a college senior returning to campus. While my school’s pandemic plan is strong, it fails to answer the most critical question I have...

What’s inside a lava lamp?

A marketer’s guide to the California Consumer Privacy Act

A massive economic crisis and the coronavirus pandemic are pushing Lebanon...