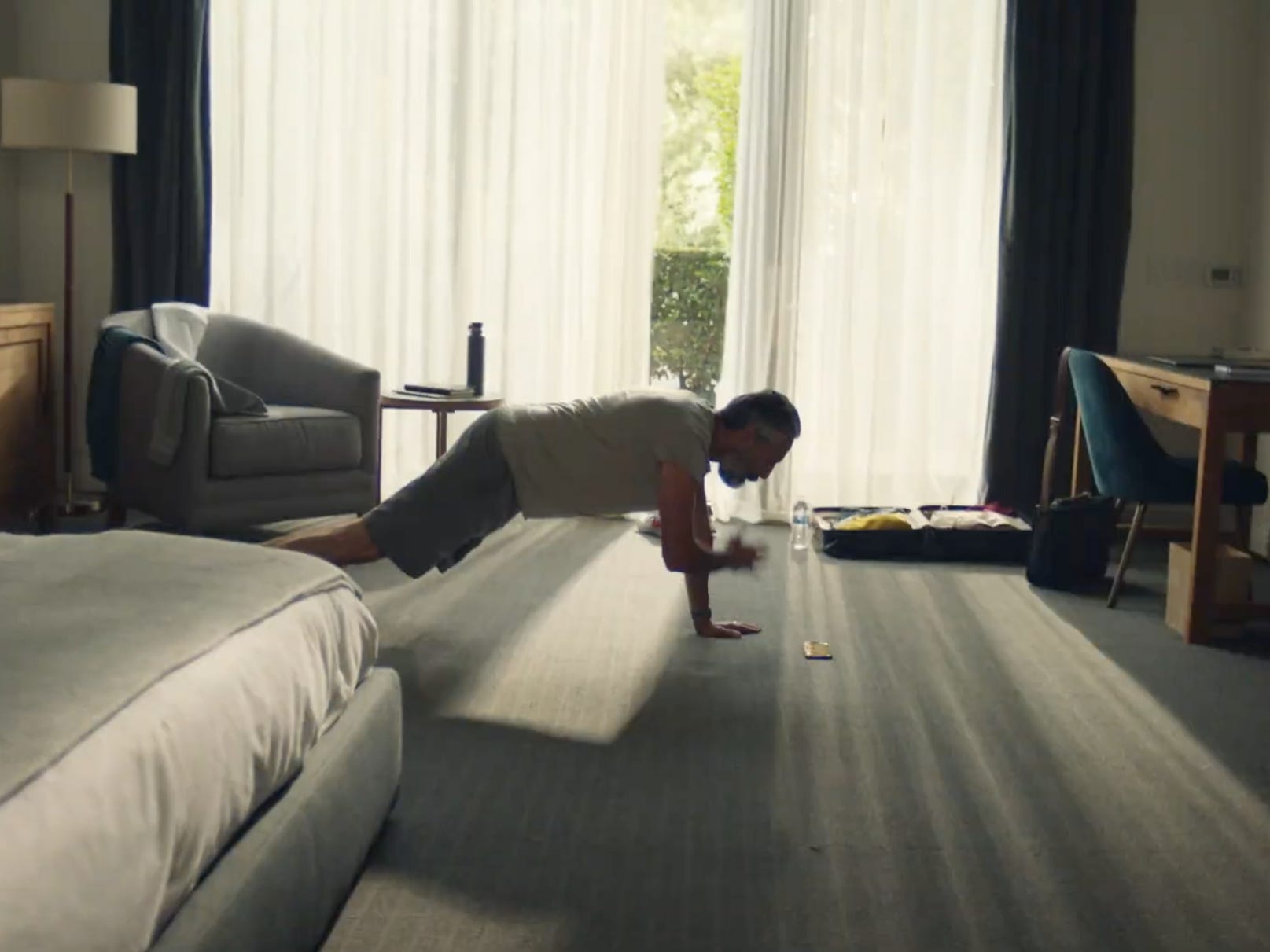 A man works out using Apple Fitness Plus.

Apple announced a new subscription fitness program on Tuesday, which will feature workouts instructed by “the world’s best trainers” and set to Apple Music playlists for $9.99 a month.
Though some analysts immediately speculated that Apple may prove a worthy competitor to Peloton, experts told Business Insider that the fitness company’s premium equipment and loyal consumer base will continue to set it apart from Apple.
Peloton subscriptions are just a small percentage of sales, comprising 20% of its total revenue in its most recent quarter, the company reported last week.
“People who just don’t have the $2,000-$3,000 for a machine will likely flock to Apple, but I’m not sure that’s as important to Peloton’s business and investors may think,” said Claude Zdnaow, founder and CEO of marketing agency holding company Stadiumred Group.
Visit Business Insider’s homepage for more stories.

Apple is eyeing a larger piece of the nearly $100 billion global fitness industry, but experts say Peloton shouldn’t be too concerned.

The tech giant announced its new Apple Fitness Plus service on Tuesday, a subscription service that will feature workouts instructed by “the world’s best trainers” and set to Apple Music playlists. At $9.99 a month or $79.99 a year, an account can be shared with up to five family members. Apple Fitness Plus also syncs to the Apple Watch and other Apple products to track real-time fitness metrics.

When news of Apple Fitness Plus broke in the middle of Peloton’s investor meeting on Tuesday — during which the company shared its goal to reach 100 million subscribers — Peloton CEO John Foley was quick to address the service, as chatter began to arise over the similarities of the two offerings.

“We’re just digesting the announcement like everybody,” Peloton CEO John Foley said on Tuesday. “The biggest thing I will say is it’s quite a legitimization of fitness content, to the extent the biggest company in the word, a $2 trillion company, is coming in and saying fitness content matters.”

Like Apple Fitness Plus, Peloton’s membership includes access to a wide variety of equipment-free workouts that can be done anywhere, in addition to its popular streaming cycling classes. Though bike owners pay more for the membership, those without a machine pay $12.99 a month.

Still, Claude Zdnaow — founder and CEO of marketing agency holding company Stadiumred Group — said despite the buzz around Apple Fitness Plus, he doesn’t foresee it encroaching too much on Peloton’s territory.

“When compared to Peloton, we really are talking about two different consumers,” Zdanow told Business Insider. “For Peloton, that’s one that wants a workout machine-enabled premium product that is all-in-one. That’s a very premium and different customer than the broad spectrum of users who may embrace the Apple Fitness Plus solution.”

Zdanow added that while Apple Fitness Plus may ultimately steal a portion of bike-less Peloton subscribers, he doesn’t anticipate it will be a significant loss to the company, which makes a majority of its revenue off selling its machines. On an earnings call with investors last week, Peloton reported that subscriptions made up just 20% of its total revenue in its most recent quarter.

“People doing floor workouts or yoga, or maybe who just don’t have the $2,000-$3,000 for a machine enabled experience will likely flock to Apple, but I’m not sure that’s as important to Peloton’s business and investors may think,” Zdanow said. “Peloton can’t even keep their machines on the shelf right now and are back-ordered for weeks.”

Andre Artacho, managing director of growth consultancy firm Two Nil, said that while demand for at-home and virtual fitness has skyrocketed during the pandemic, he’s wary of the long-term success of a program like Apple’s.

“Apple needs to make an immediate splash with this venture and capture users before restrictions become more loose coming out of COVID,” Artacho told Business Insider. “There are many people who are anxious to go back to the gym, but many who are also concerned about being back in the gym environment. If Apple can successfully win the users who are leaning to the latter, then they would likely increase the chances of these users becoming long-term subscribers and never going back to a traditional gym.”

Both Zdanow and Artacho said that Peloton’s widespread popularity will also prevent any major headwinds from Apple Fitness Plus. However, emerging luxury at-home fitness programs that haven’t gained as much traction — such as Mirror, Tempo Home Fitness, and Tonal — may be impacted down the line.

“There is a lot more hype around Apple’s new fitness program because it is Apple,” Zdanow said. “In reality, there are other providers in the space that already have done this for a while and offered app-enabled workout classes. The key differentiator here beyond it being Apple is that it is also part of the Apple ecosystem, which is where Apple always wins.”

Get your early-bird tickets to TC Sessions: Enterprise 2019

LIVE!: The historic meeting between South Korea and North Korea is underway — here’s...