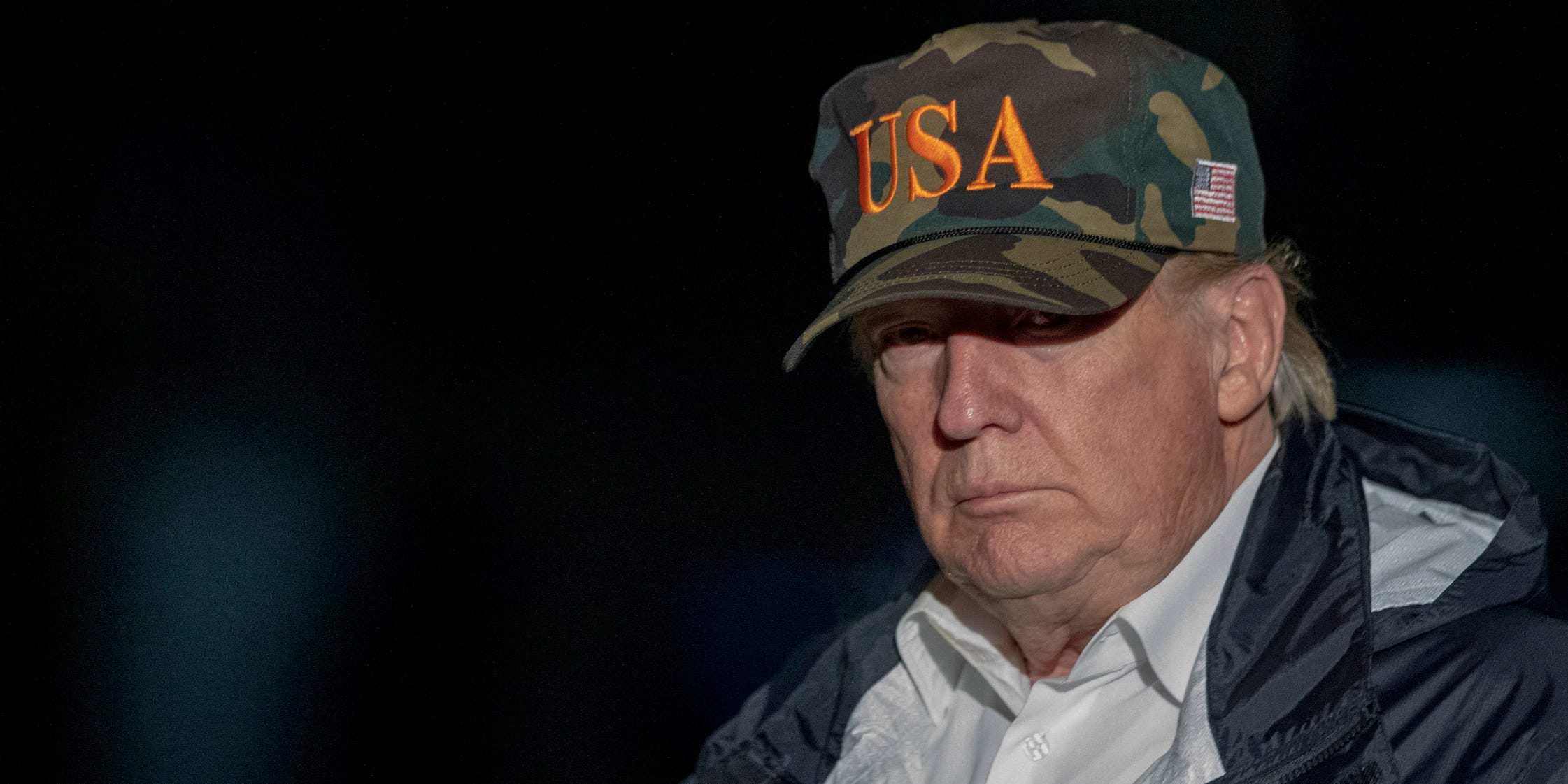 U.S. President Donald Trump walks off Marine One on the South Lawn of the White House returning from California after viewing damage from that state's wildfires on November 18, 2018 in Washington, DC.

We all know Trump is a compulsive liar and gullible audience for baseless conspiracy theories.
But we don’t always get confirmation like Bob Woodward’s taped interviews showing the president blatantly lied to the American people about the transmissibility and deadliness of the coronavirus.
Trump and the GOP’s flirtations with the far-right, anti-Semitic conspiracy theory movement QAnon have emboldened its adherents, who are now causing chaos in the response to the West Coast wildfires.
He’s a bully, a liar, and a gullible dunce. And he makes Americans unsafe.
This is an opinion column. The thoughts expressed are those of the author.
Visit Business Insider’s homepage for more stories.

While it can be easy to get lost in President Donald Trump’s morass of falsehoods, and his conspiracy mongering can lead you to assume “nothing matters,” two recent events stand out as sober reminders of just how dangerous Trump’s presidency actually is for the American people.

First off, Trump lied to the American people about what he knew about the deadliness and transmissibility of the coronavirus. That’s why so many of his supporters believed for months that COVID-19 is “just the flu” and why the simple act of wearing a mask in public continues to be seen as a form of surrender in the “culture war.”

People died, and continue to die, because Trump is a compulsive liar, an incompetent executive, and a deeply unserious person.

Tapes and transcripts of Bob Woodward’s interviews with the president have been made public to coincide with the release of Woodward’s new book “Rage.” There’s no ambiguity to these tapes. No “out of context” accusations can be credibly leveled against Woodward. They simply show Trump at work.

There’s a lot of available evidence to make the case that Trump bears responsibility for presiding over the developed world’s worst coronavirus response.

But nothing quite compares to Trump’s explicit lies about the threat he knew the coronavirus posed in the weeks before the World Health Organization declared it a pandemic.

“It goes through the air. That’s always tougher than the touch. You don’t have to touch things. Right? But the air, you just breathe the air and that’s how it’s passed. And so that’s a very tricky one. That’s a very delicate one. It’s also more deadly than even your strenuous flus,” Trump said on February 7.

Trump lied to the American public about the coronavirus on that day, and many days after.

A chief executive so rarely gets caught as red-handed as Trump has, but his supporters don’t care that Trump is not only a shameless liar, they also are cool with him being an unhinged conspiracy theorist, a teetotalers’ version of Alex Jones.

Trump is the QAnon president

The second reminder of the dangers posed by Trump as president relates to the recent wildfires consuming large swaths of the West coast.

Oregon Gov. Kate Brown said the state is preparing for a “mass fatality incident.” Meanwhile, law enforcement and first responders have been inundated with calls inquiring about these conspiracy theories, and journalists have reported being confronted by armed militia types hunting for left-wing arsonists.

QAnon accounts are directly responsible for turning this hoax theory into a crisis. It’d probably be as good a time as any for Trump to denounce QAnon.

But other than one QAnon supporter being disinvited to speak at the Republican National Convention at the very last minute, and Vice President Mike Pence cancelling an appearance organized by QAnon supporters, the movement is still cozy with Trump and the Republican Party. And now this movement, fostered — or at least — by Trump for political gain are causing real problems for people trying to respond to a devastating natural disaster.

When asked about QAnon in August, Trump said “these are people who love our country.” When Marjorie Taylor Greene, a QAnon supporter, won the Republican nomination for a Georgia congressional seat, Trump endorsed her.

Trump’s game of footsie with the unhinged and deeply anti-Semitic QAnon movement could suggest a calculated campaign strategy to shore up his base, but that requires Trump ever has a plan.

Celebrated author and New Yorker staff writer Masha Gessen told me in July, “I don’t think anything in the Trump universe is by design.” Rather than having latched onto a grand plan perfectly calibrated to own the libs and stoke the passions of the MAGA right, Trump’s “incompetence is militant.”

All presidents lie, but the sheer volume and audacity of his most easily disprovable lies separates him from the pack. And Trump would hardly be the first senior citizen Fox News-addict taken in by nonsensical conspiracy theories spread on Facebook.

But Trump’s most enduring legacy will be the degree to which he was comfortable with blatantly lying and happy to engage with conspiracy theories. And it will be just how many lives were put at risk, and ultimately lost, because of those traits.

Trump, as president, continues to reveal his character. He’s a bully, a liar, and a gullible dunce. And he makes Americans unsafe.

Read more:‘One Billion Americans’ author Matt Yglesias on increasing immigration, encouraging larger families, and why he signed the ‘infamous Harper’s letter’Social media is a parasite, it bleeds you to live‘Twilight of Democracy’ author Anne Applebaum on the rise of authoritarianism, the dangerous power of conspiracy theories, and why she signed the ‘Harper’s letter’Trump has officially turned the GOP into the QAnon PartyRead the original article on Business Insider

For centuries, monks have embraced social isolation for increased mental strength and self-awareness —...

Stormy Daniels Calls Out Michael Avenatti In New Statement — And He Responds!

These Were The Most Popular Baby Names In The 1930s

Trump responds to Omarosa tapes by describing her as a pathetic...

Kanye West shared an image of his face carved into Mount...

One of Uber’s newest partners plans to fly electric helicopters that...