So close… and yet so far!

Sofia Richie is the focus of the July 2020 cover story in Cosmopolitan UK, in which she discusses her career, growing up in the spotlight under her famous father, and — oh, yeah — her (now former) relationship with Scott Disick.

Published just days after news of their split first broke, Sofia’s comments about Scott in the magazine piece appear to give insight into what didn’t cause the split, at least… despite the remarkably bad timing!

Related: The Breakup Rumors Started To Rumble Late Last Week, And Then…

Let’s cut right to the chase: during the interview, the 21-year-old model openly addressed her then-relationship with the 37-year-old real estate mogul and embattled reality TV star. When asked about the 16-year age gap between her and the Flip It Like Disick lead, Sofia responded strongly and confidently:

“I just don’t care what people think. [It] doesn’t bother me because I’m very happy. Why would I let someone from the middle of nowhere ruin that for me?”

Well said! Maybe a good lesson for lots of celebs on not taking social media comments too seriously nowadays, ya know?! 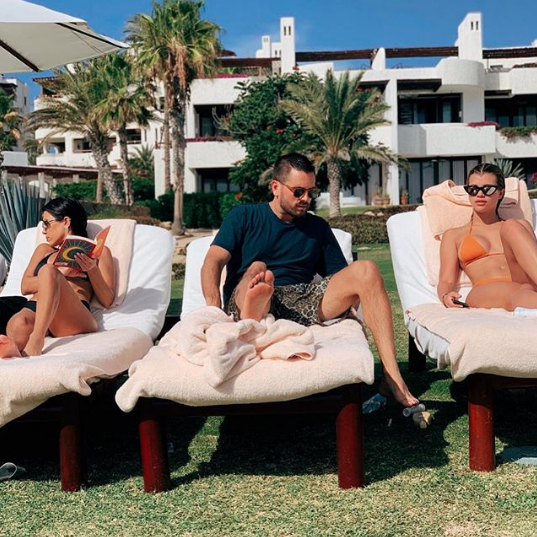 No matter what ends up happening between Sofia and Scott (and Kourtney), thank goodness they gave the world this INCREDIBLE meme material. LOLz!! / (c) Scott Disick/Instagram

Sofia apparently really dove into that laissez-faire attitude around Scott, as she also admitted to the mag that her secret for getting along with his ex and baby momma Kourtney Kardashian was actually extremely simple:

“I mean, just be nice. There’s no reason not to be nice.”

Well, there is one reason… If you for some reason wanted your ex to break up with his younger girlfriend…

Related: Soooo What’s Up With Sofia And That Malibu Mystery Man?!

Elsewhere in Sofia’s Cosmo cover story, the model turns to the future and hints to the mag she wants to be a “bad ass triple threat” in 2020, explaining how far her career has come so far, and how far she hopes it’ll go:

“When things were first starting, I was discouraged because everything I did was ‘Lionel Richie’s daughter.’ But it’s hard branching out into my own person when I have such a powerful artist as a father. My dad was always like, ‘Once you find your thing, you’ll move away from that,’ and I feel like over the past couple of years, I found my lane in life to go the direction I want to go. This year, I’m not scared to fail. I don’t think there’s necessarily failing. It’s just learning and growing. I feel like there’s a space for me to talk about mental health, having dealt with severe anxiety.”

We know the model is launching a bikini line soon, and judging by that last line, it sounds like activism may be in her future, too.

Say hi to our incredible cover star – @sofiarichie! 😍🌟The July issue is out tomorrow (28 May). Can't make it to the shops to pick up your copy? Hit the link in our bio to subscribe or buy it online with FREE next day delivery!

Should make for a busy, productive, and memorable 2020, we’d think. But we’re not gonna lie… we’re still curious about what really went down with her and Scott!

What do U think truly happened behind the scenes on this one, Perezcious readers?! Just another one of the apparently many splits this couple has endured?? Or is something different this time around?!

Ellen DeGeneres Is BACK — So Let’s Recap Her Summer Of Drama!

Watch Lady Gaga break down in tears as she performs ‘Shallow’ for the first...